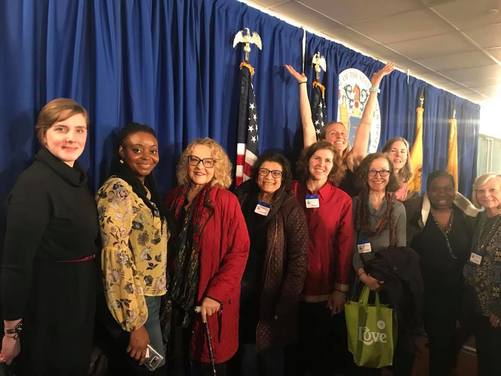 South Jersey Women for Progressive Change (SJWPC) is an intersectional action network that organizes through its online forums, through its Political Engagement Committee and through various Action Groups that support our Progressive Platform.

SJWPC was first formed as a Political Engagement group, and this work remains very central to our organizing. In short, we believe in flipping districts and places where they are held by Republicans; in places that are controlled by the Democratic Party, we believe it is our responsibility to push Democrats to be better. We long for the day we can be proud of our local and NJ state Democratic Party, when they are transparent and responsive, vanguards of strong principles of democratic governance, and are proud standard bearers of Progressive ideals. Over 90% of our members are registered voters. Our vision is to cast our valuable vote for diverse, exciting, Progressive candidates we are absolutely thrilled to be supporting.

We believe that “Progressivism” means something specific and tangible- it is not Bernie vs Hillary; it is not simply Red vs Blue vs Green. Progressive policies reflect progressive values, which prioritize equity, the environment, education, democratic principles, racial justice and civil rights. We believe Progressivism is the best way to win elections--in urban AND in rural areas--and at over 8,000 members strong, we are dedicated to holding our elected officials accountable.


​The Political Engagement Committee is a standing committee that has six goals: